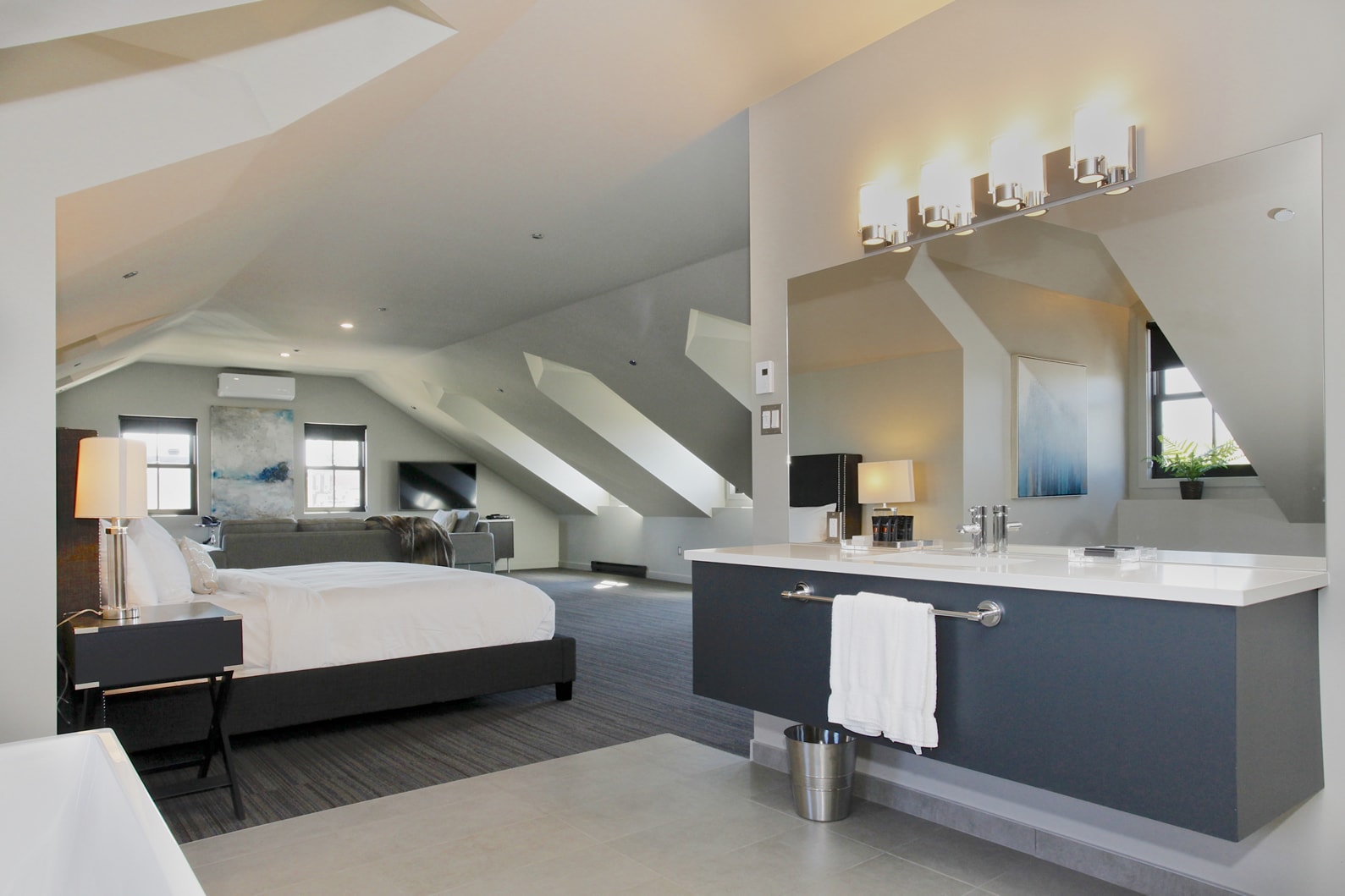 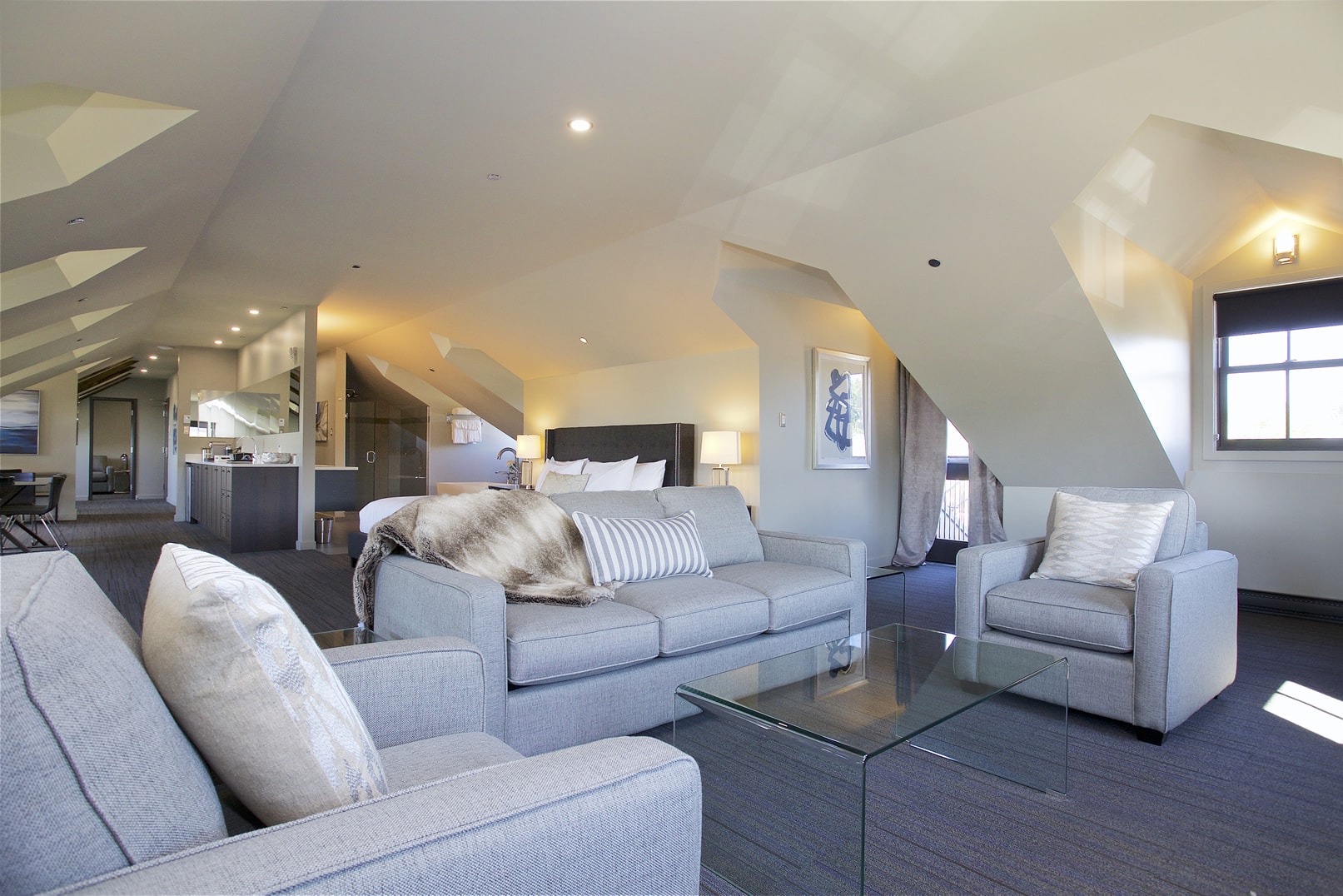 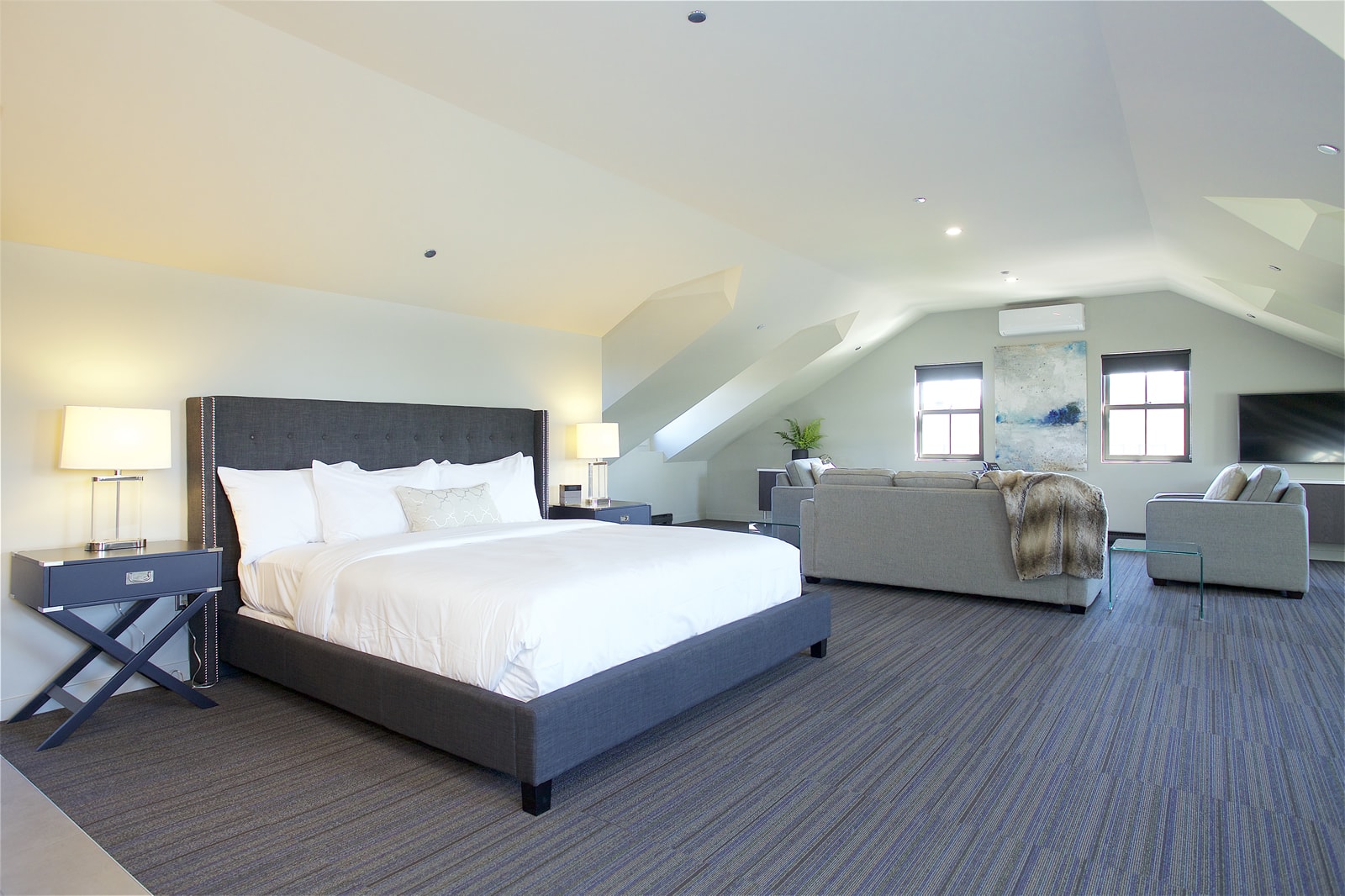 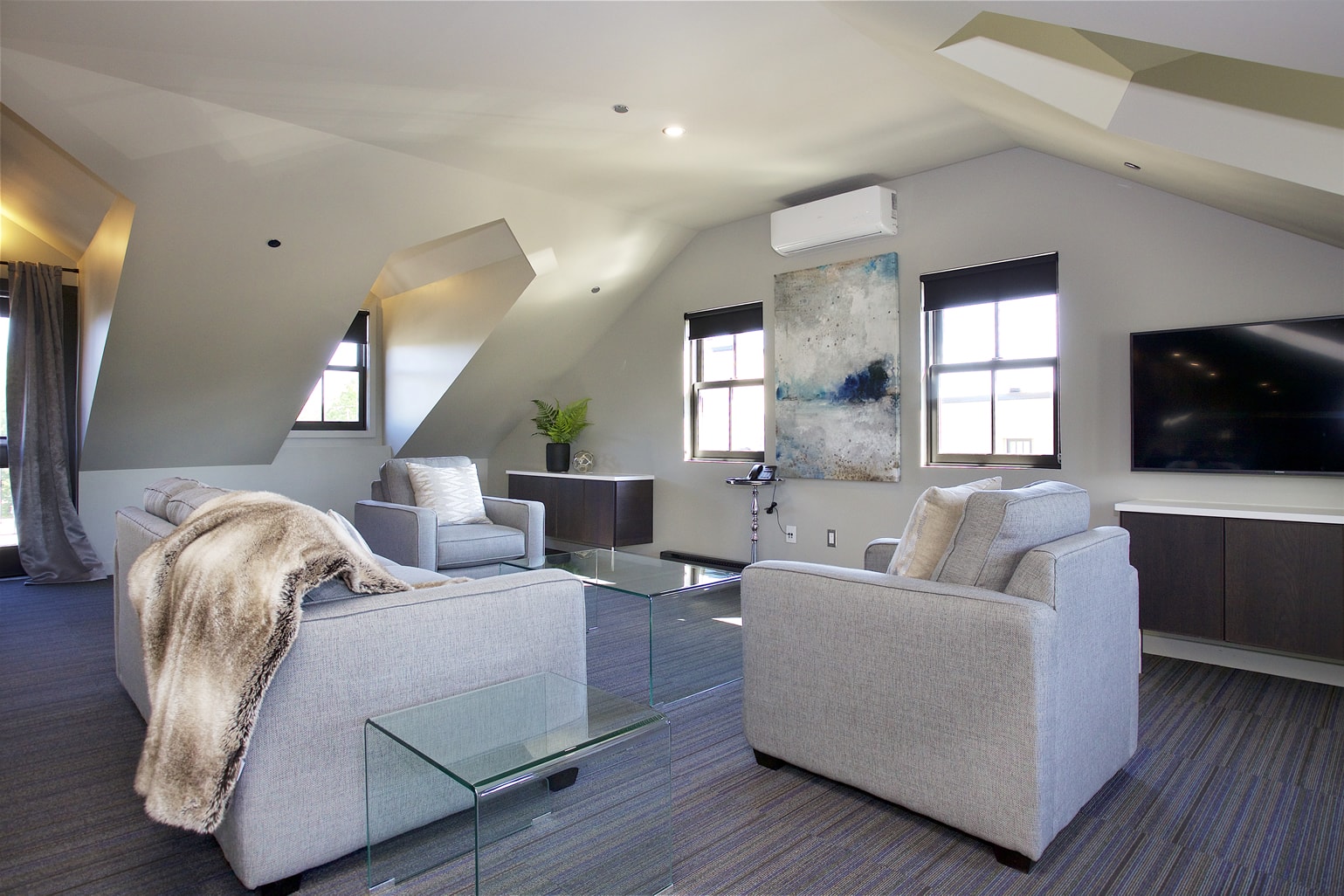 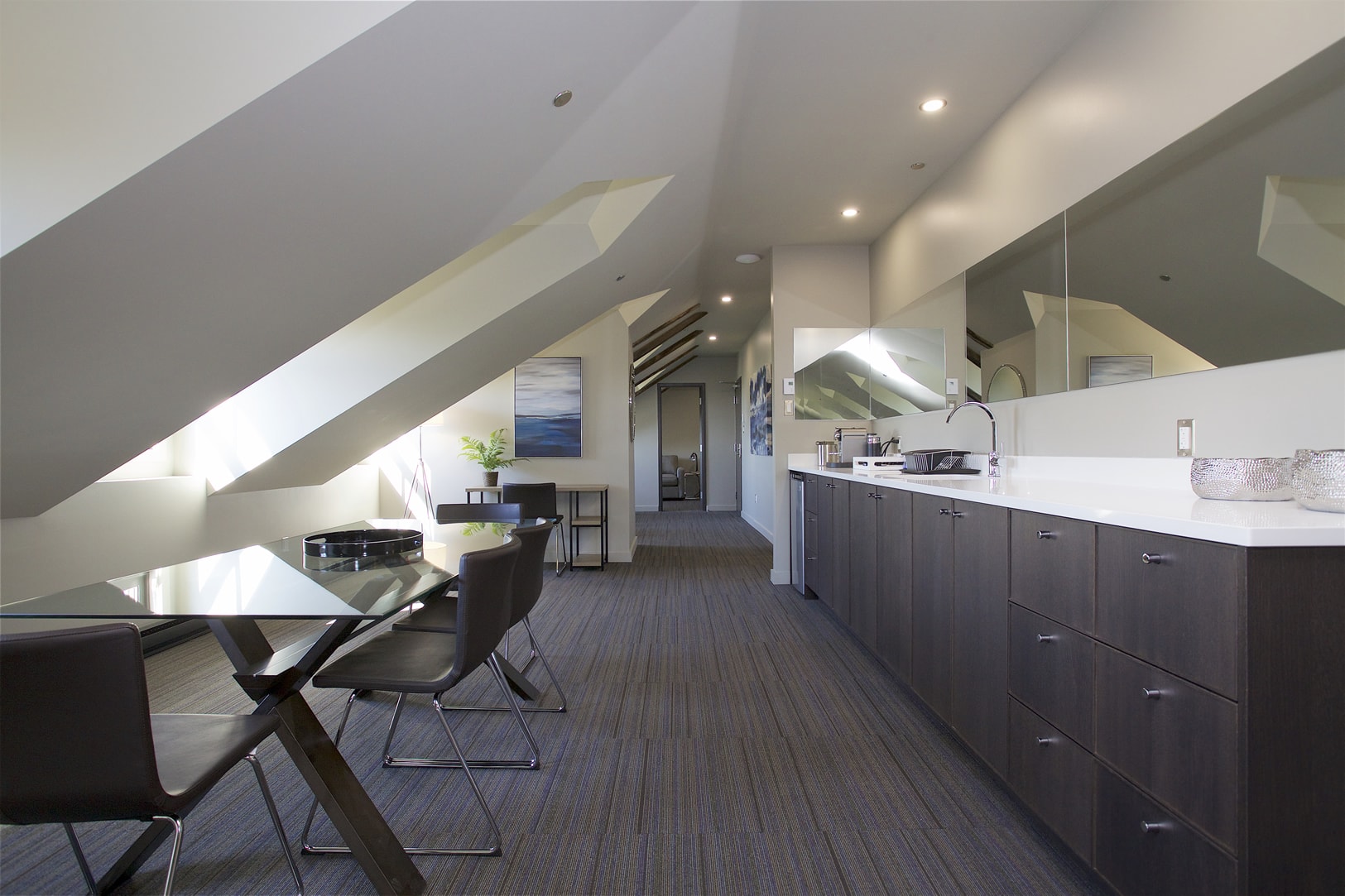 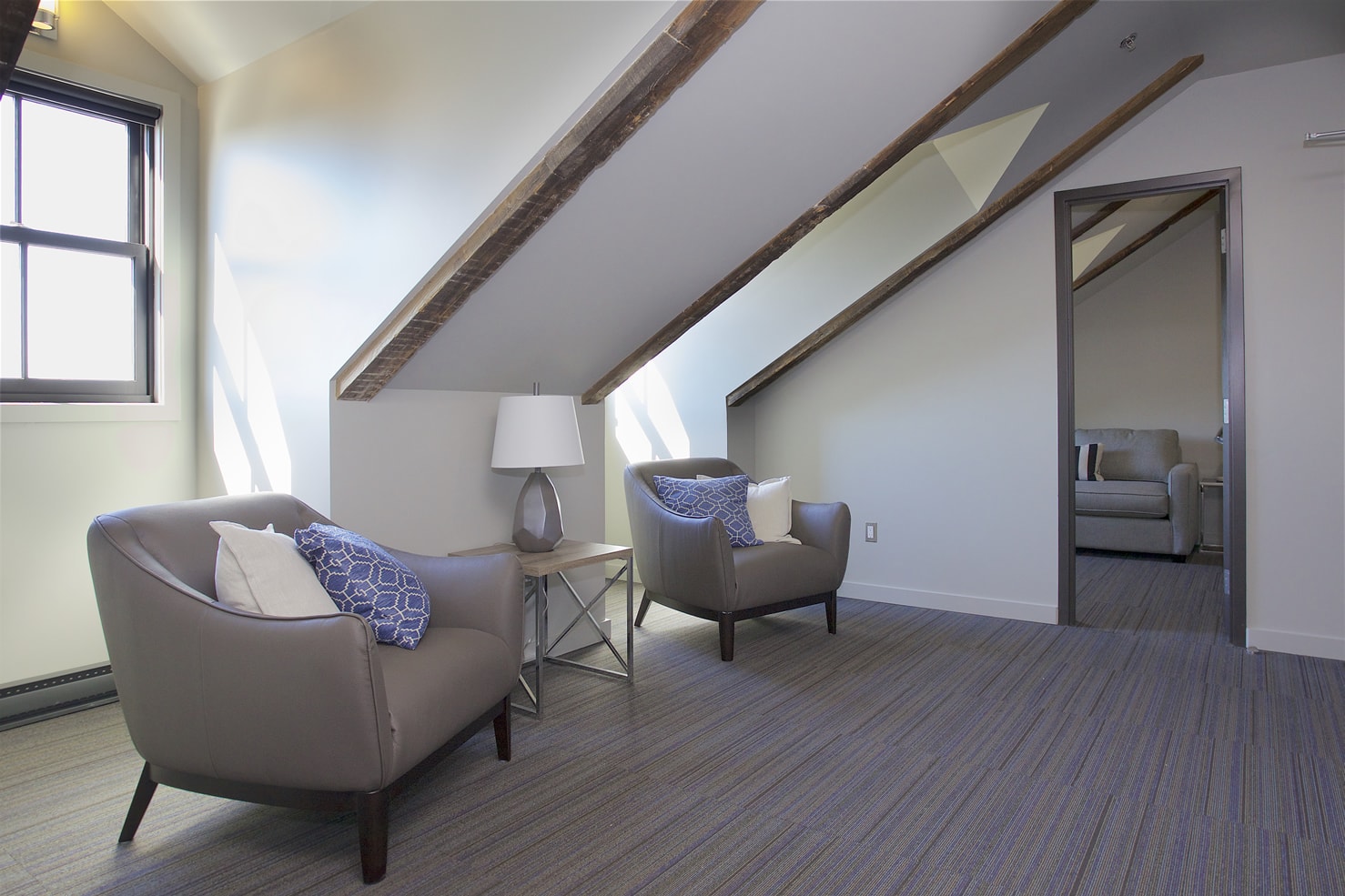 The McConnell is a first choice for newlyweds or anyone looking for a romantic escape. With its cathedral ceiling and Georgian-style dormer windows, this honeymoon suite offers couples an enchanting getaway in the heart of Old Aylmer.
More than 1,4oo-square feet in size, the McConnell has an open-concept design with a king-sized bed, a kitchenette, a freestanding tub, and an open walk-in shower. The suite also includes a private room with a sofa-bed, suitable for guests or children. 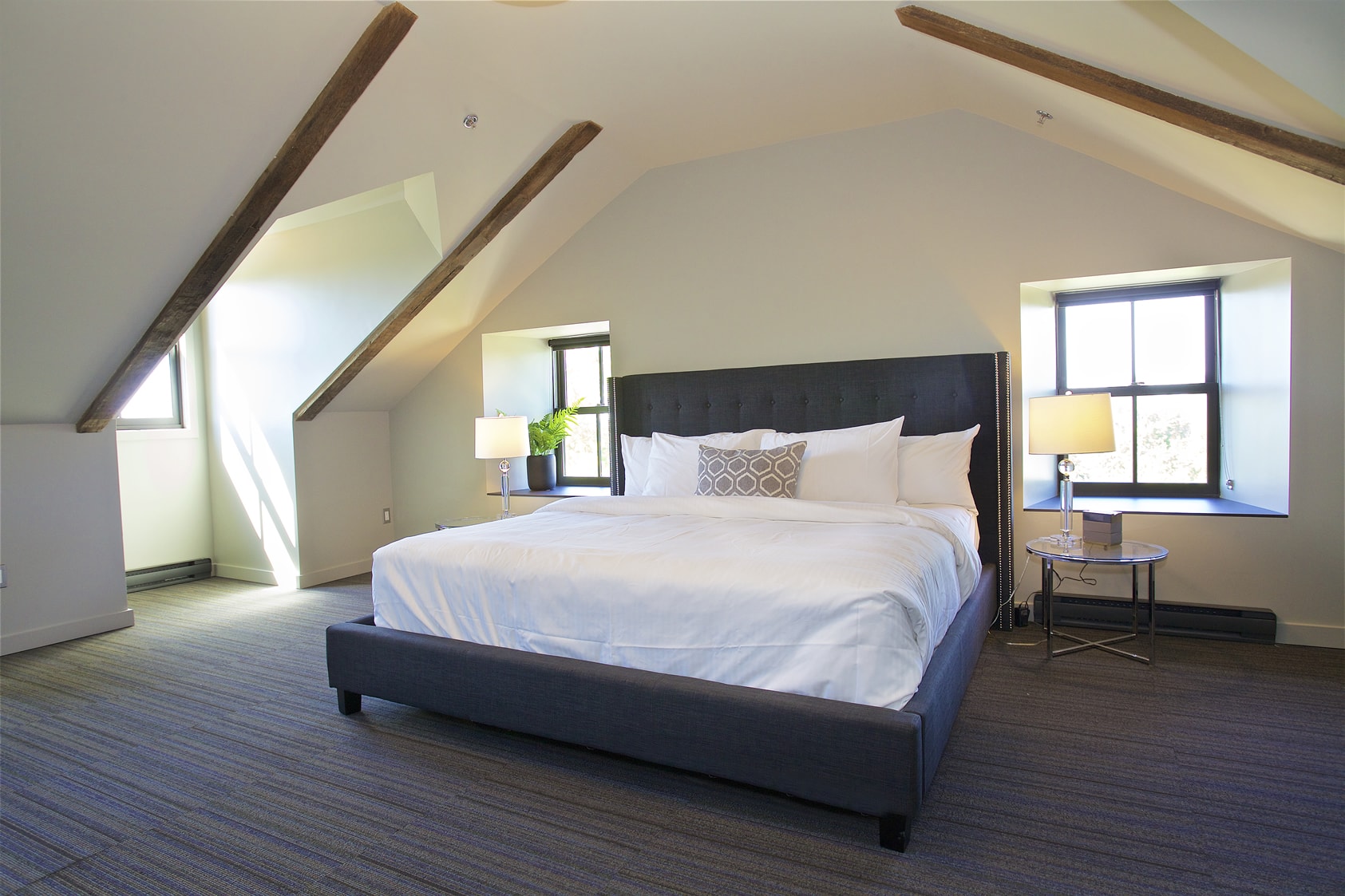 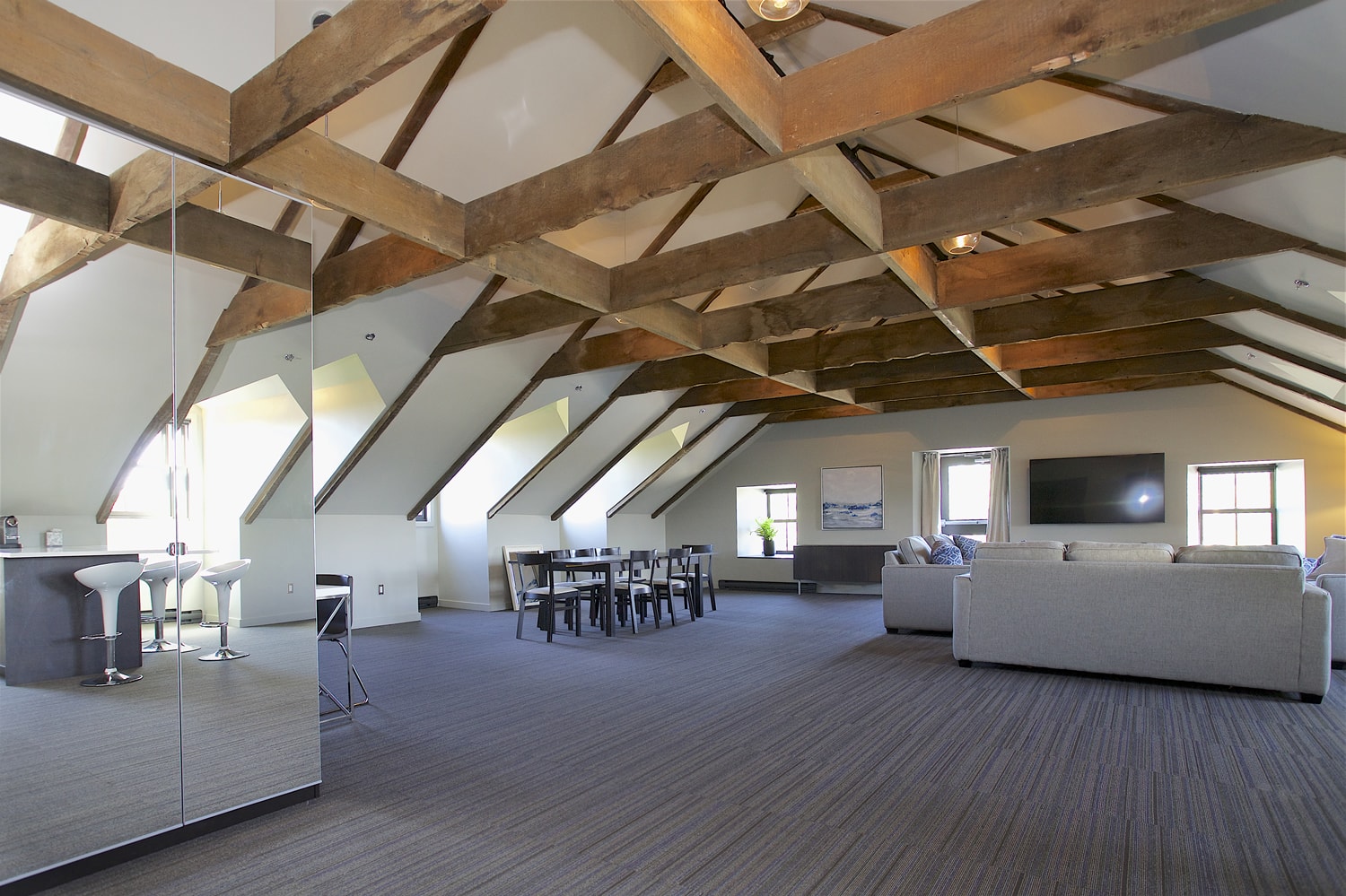 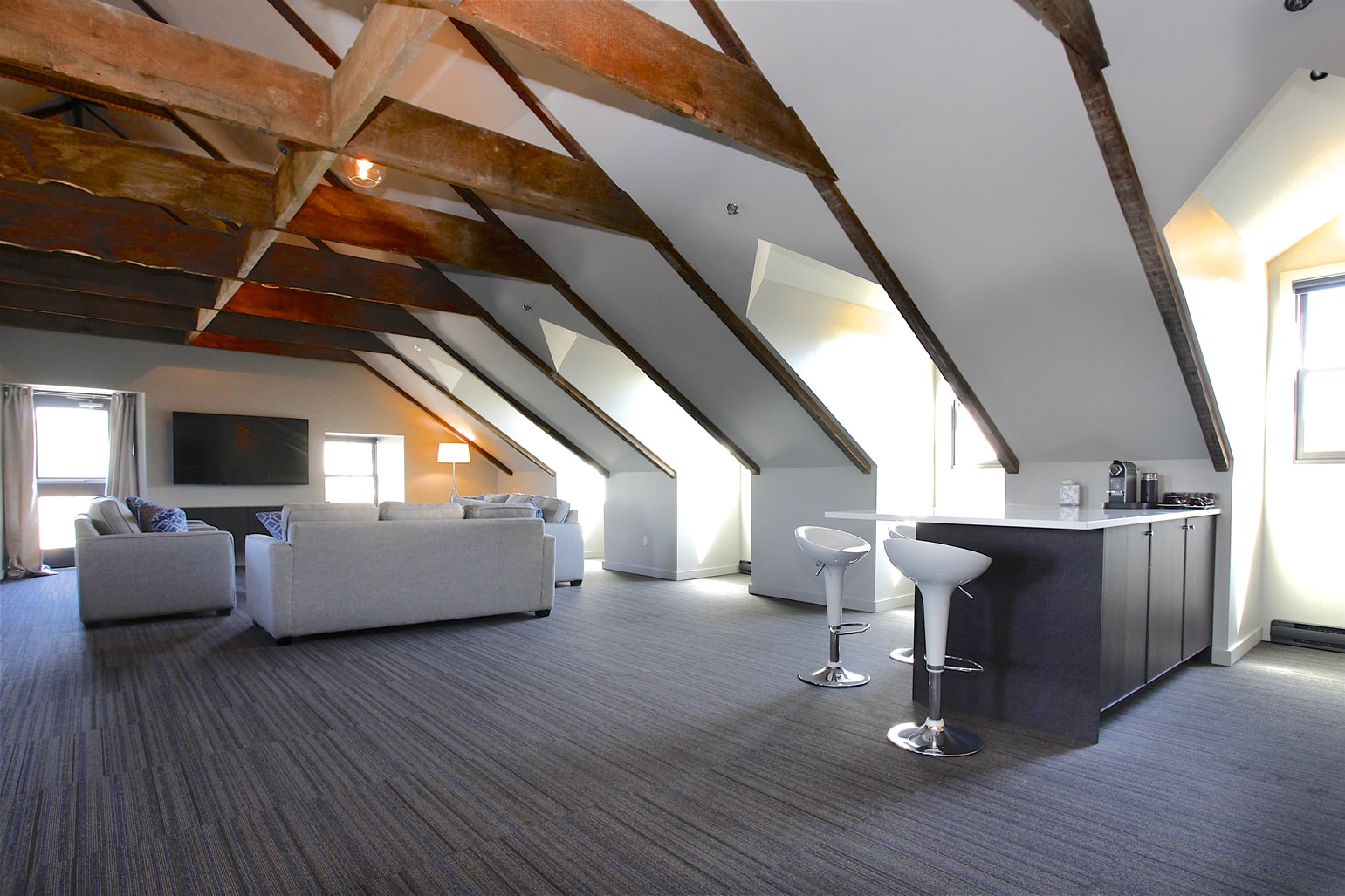 Over 1,8oo-square feet, this presidential suite includes a large dining area that can double as a boardroom for private meetings or gatherings. In addition, its sitting area has two sofa-beds and a 65-inch flat screen TV, making it equally appealing for families or special events. In fact, it is often used as a pre-wedding space for groomsmen or bridal parties preparing for their ceremony downstairs.
The separate bedroom offers guests a peaceful retreat, with a king-sized bed, a 6o-inch TV, and a luxurious bathroom with walk-in shower and freestanding tub. 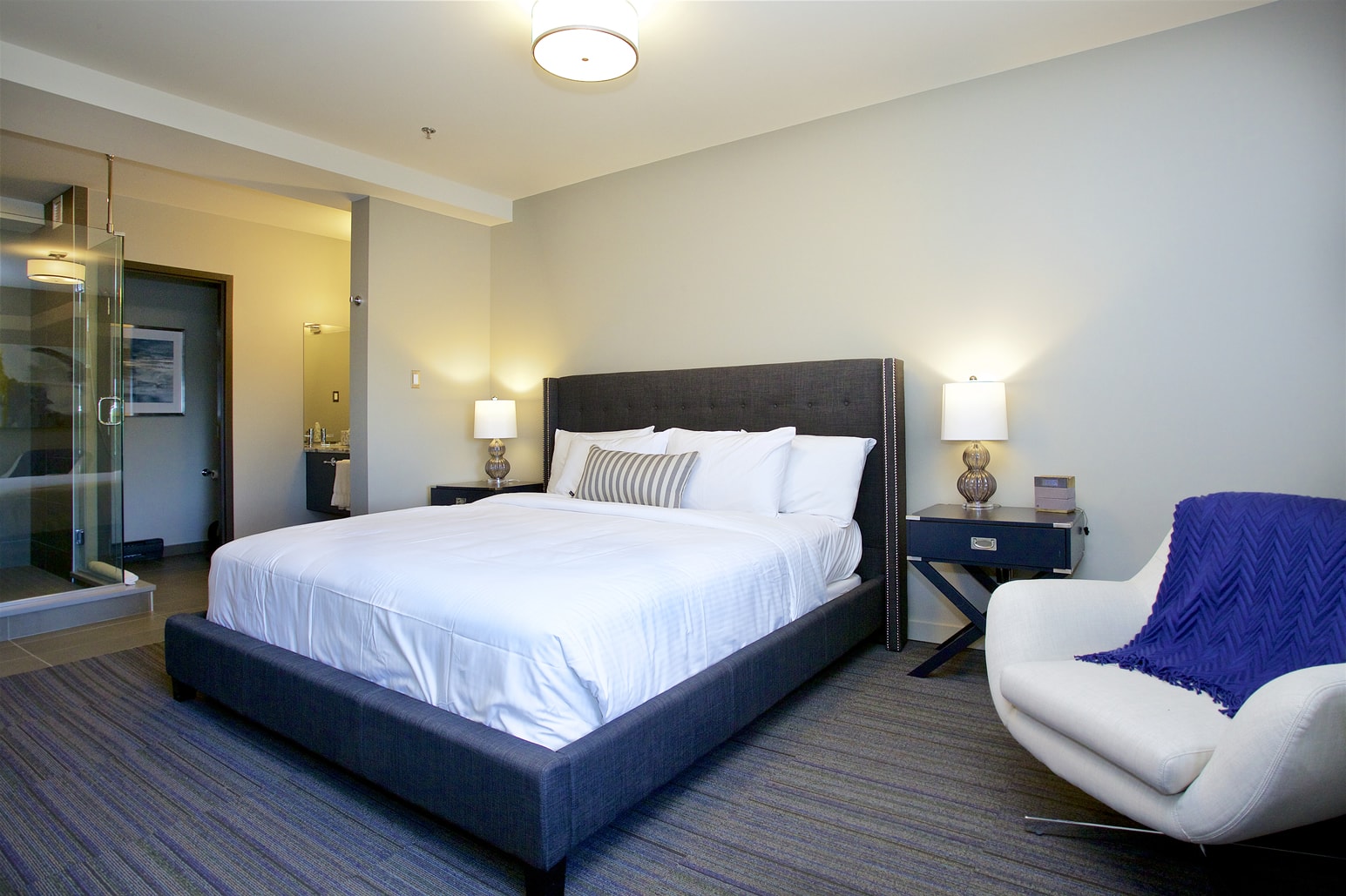 This executive suite is made up of two rooms. The larger includes a king-sized bed, TV, office workspace, and a large open-concept bathroom with a walk-in shower. The smaller room is fitted with a sofa-bed and another TV, and can double as a second bedroom. Its large sunny windows overlook beautiful Old Aylmer’s main street. 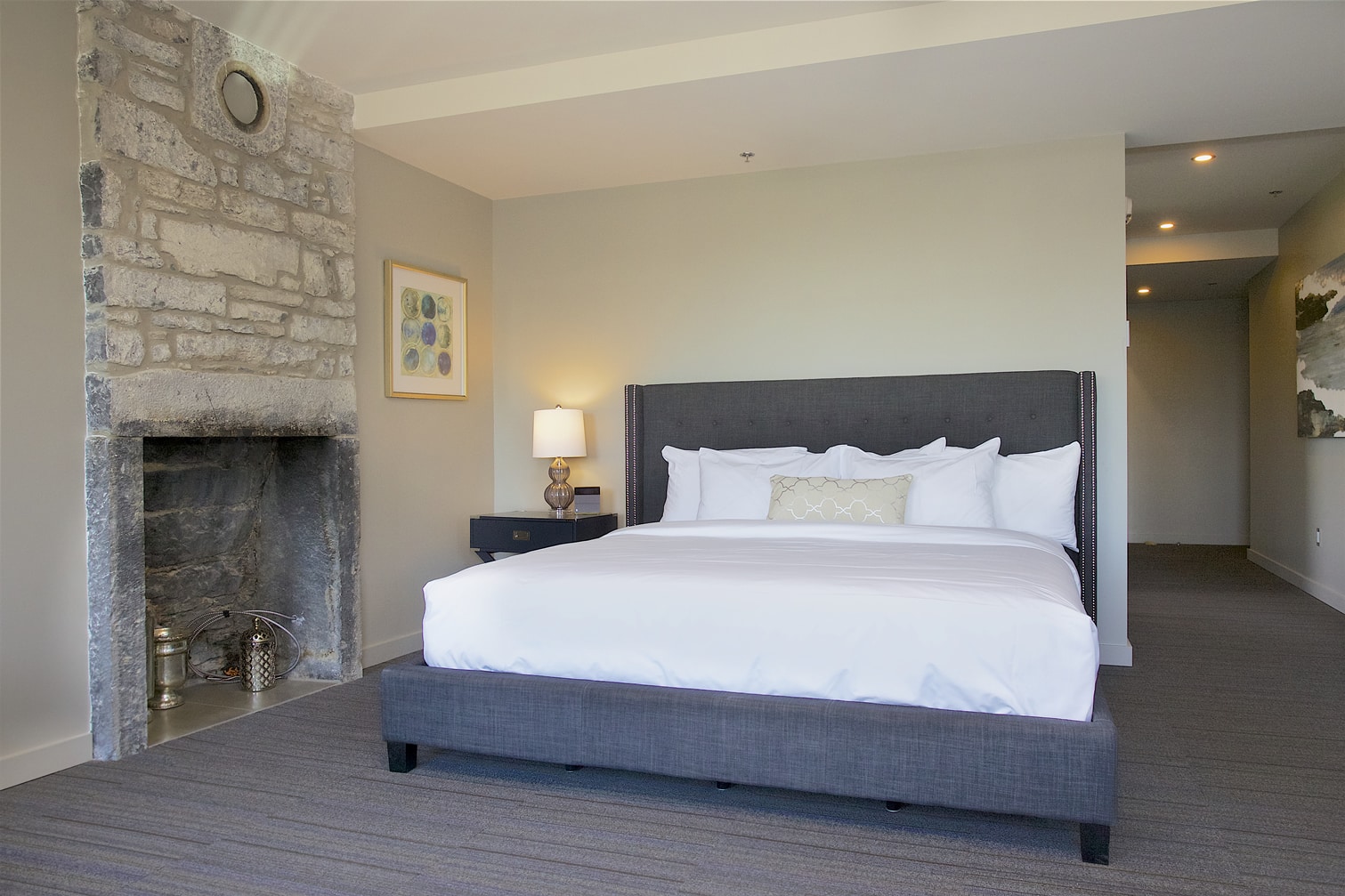 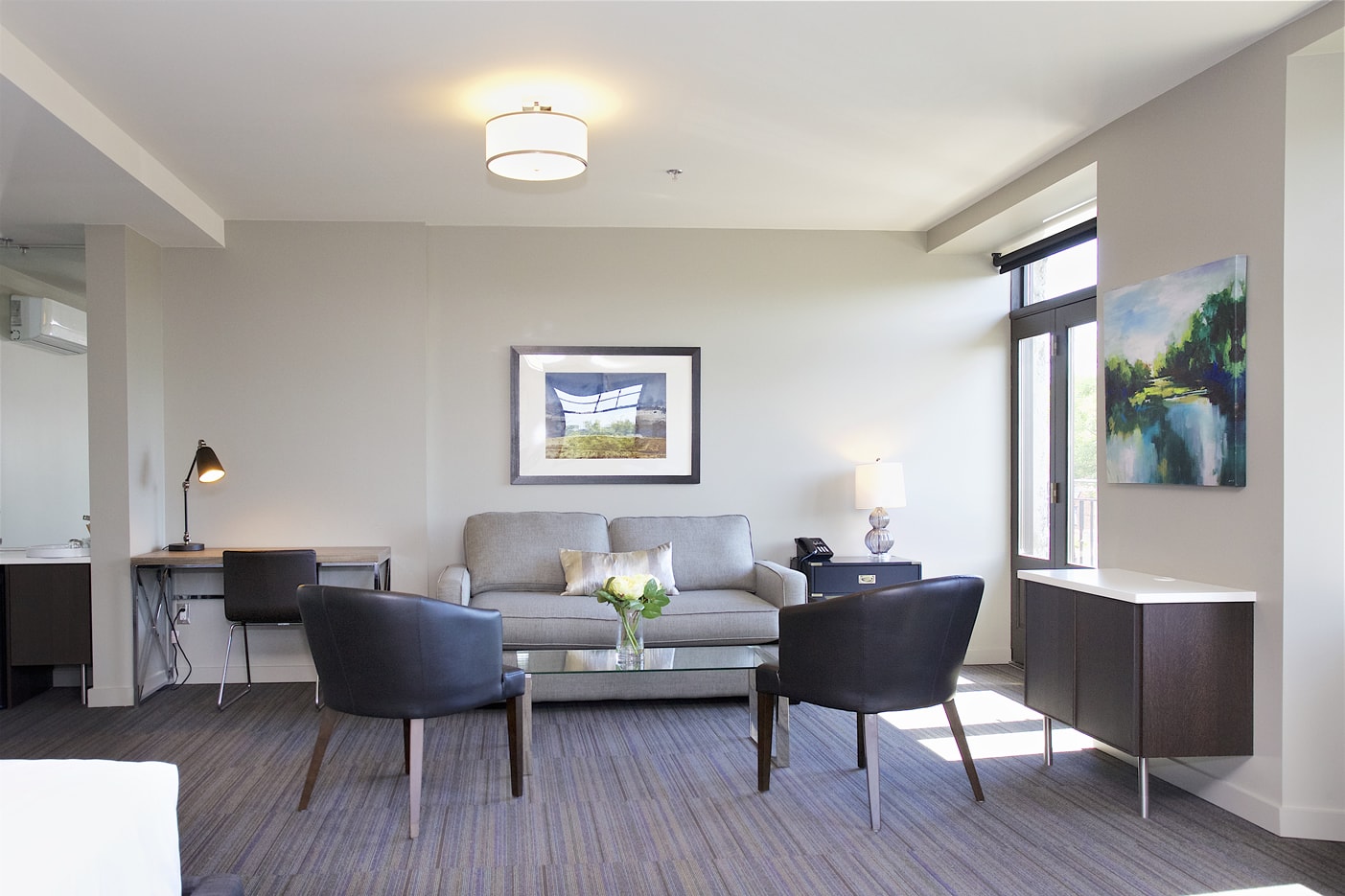 This one-of-a-kind room is steeped in history. In fact, its large windows once opened onto a balcony where the Prince of Wales addressed the population in 186o. It is furnished with a king-sized bed, sleeper sofa, luxurious bathroom with a freestanding tub, and a decorative fireplace set in the original stone hearth. 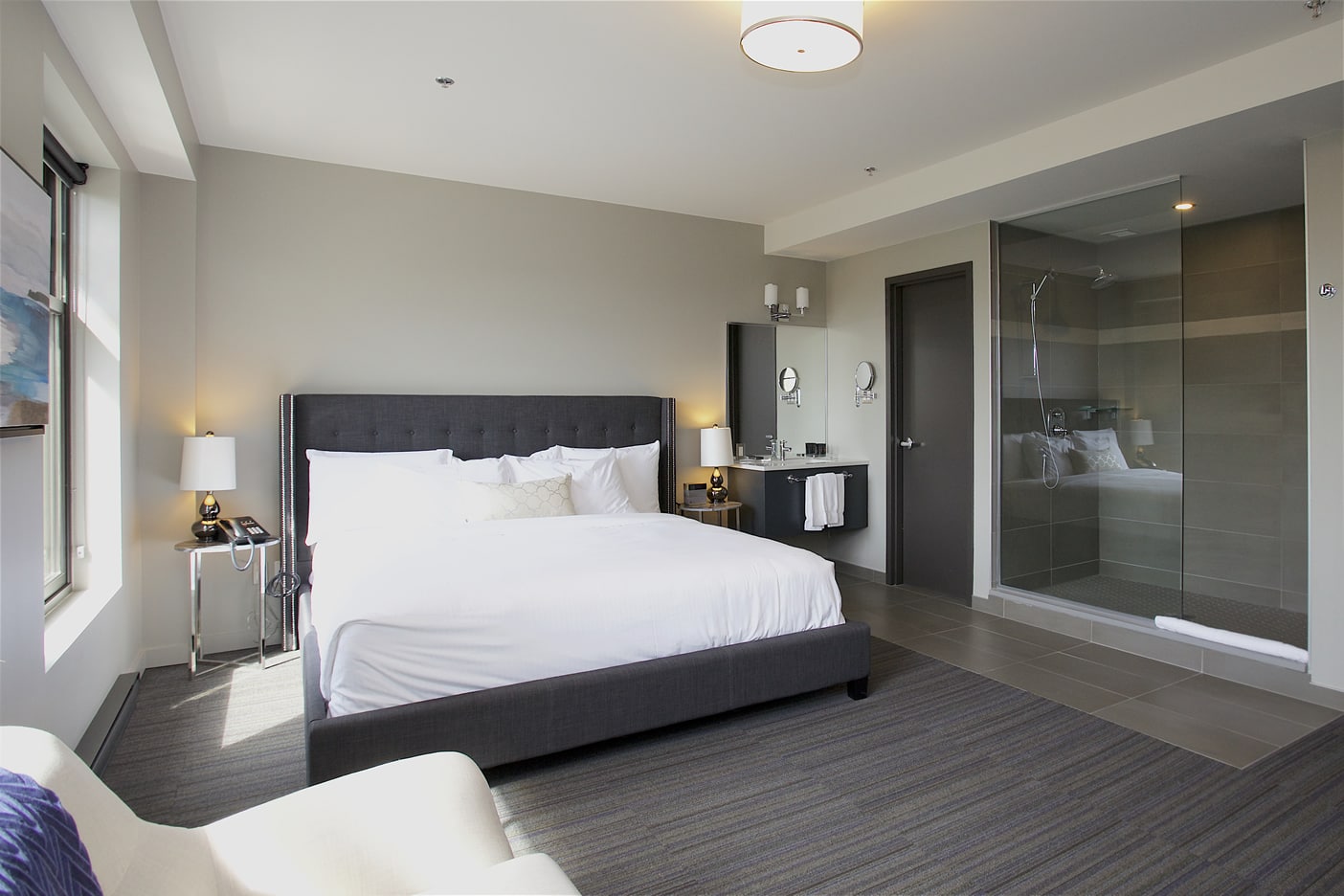 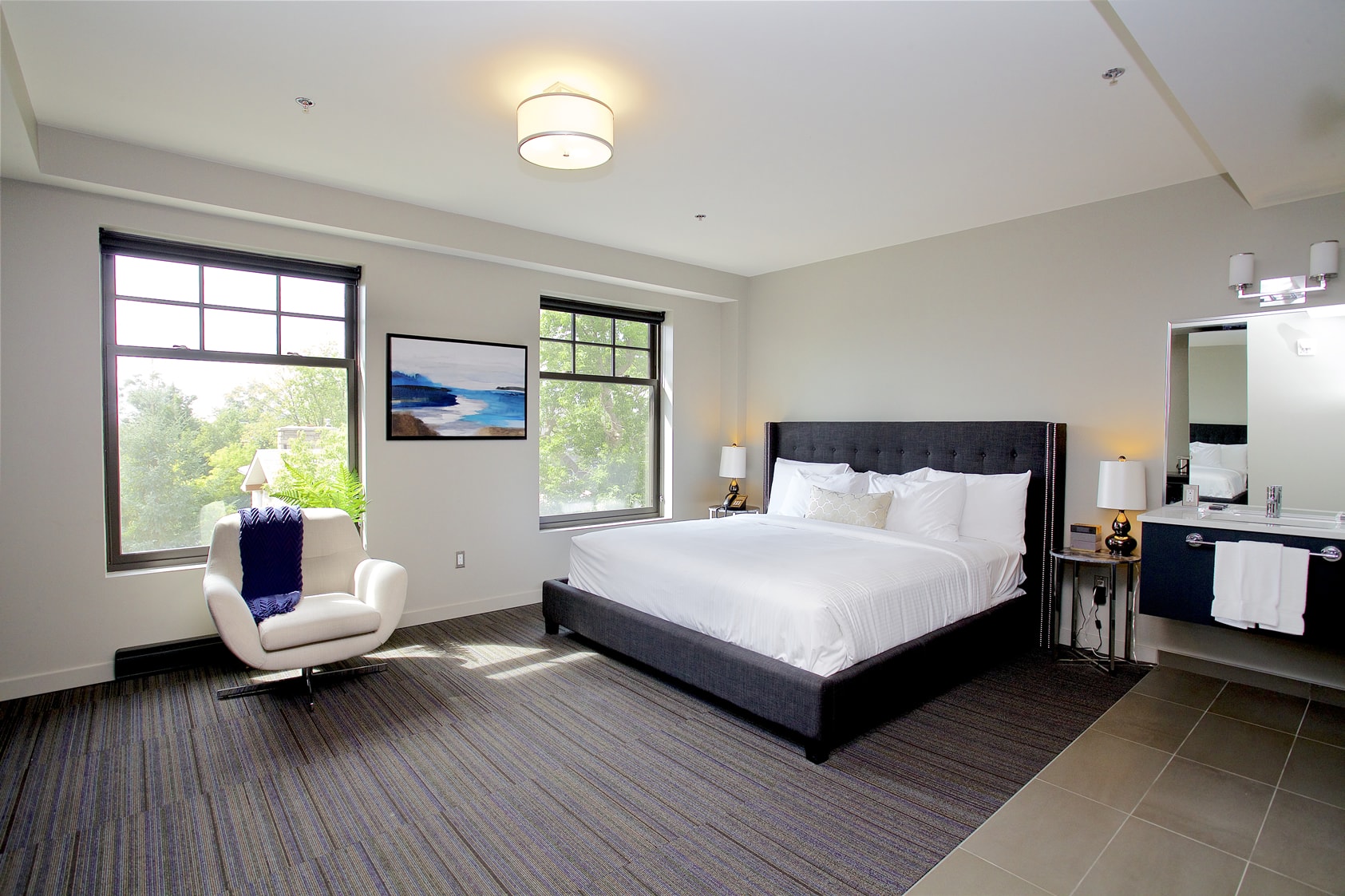 In post-Confederation Canada, the British Hotel was known as the finest in the region. In fact, Canada’s first prime minister, Sir John A. Macdonald, was known to sip beer at the British, sitting by the fireplace in what is now called the Gold Room. The Sir John A. Macdonald room is elegantly decorated with a king-sized bed and luxurious modern bathroom. Its large sunny windows offer an excellent view of the Ottawa River. 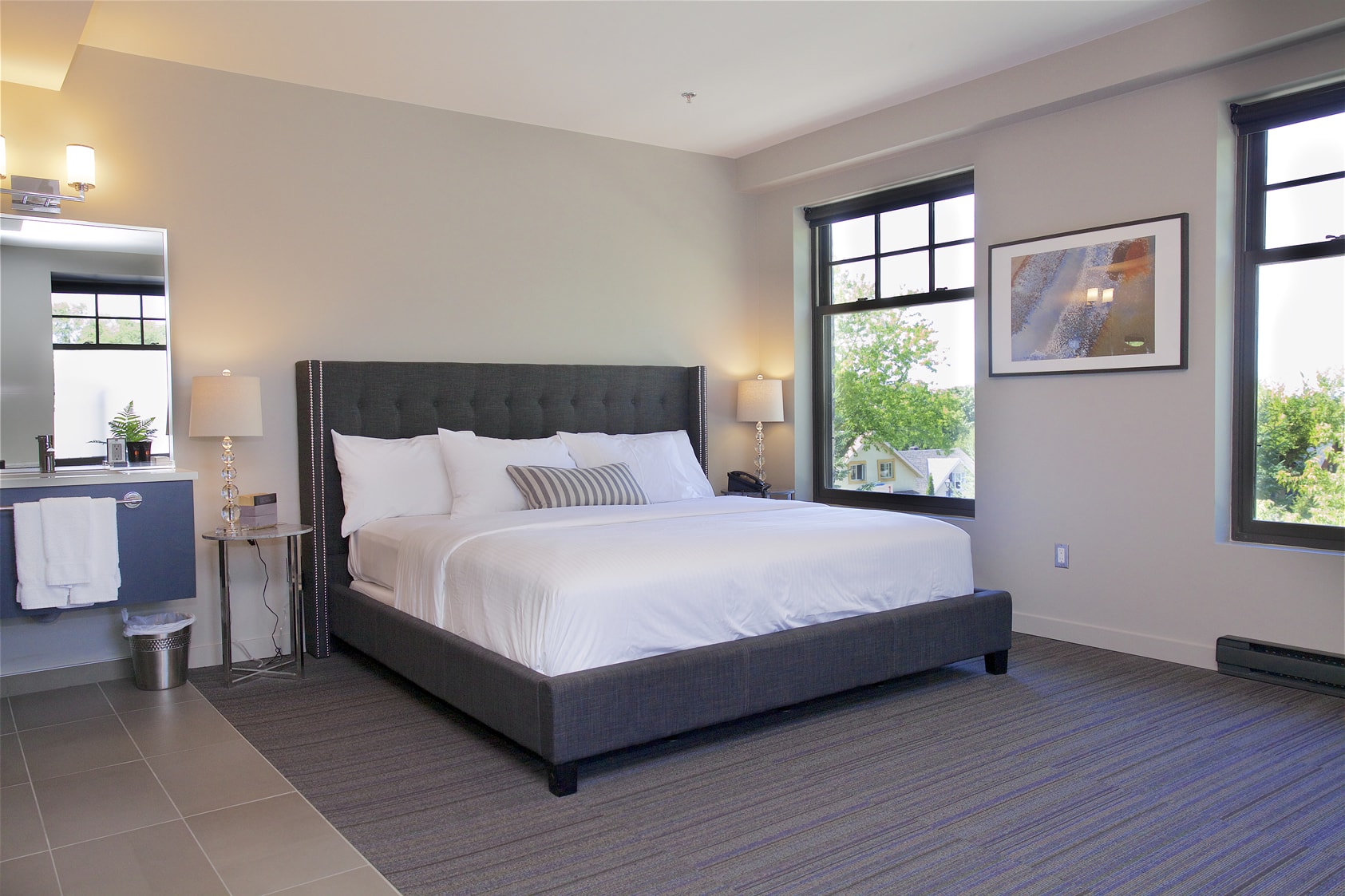 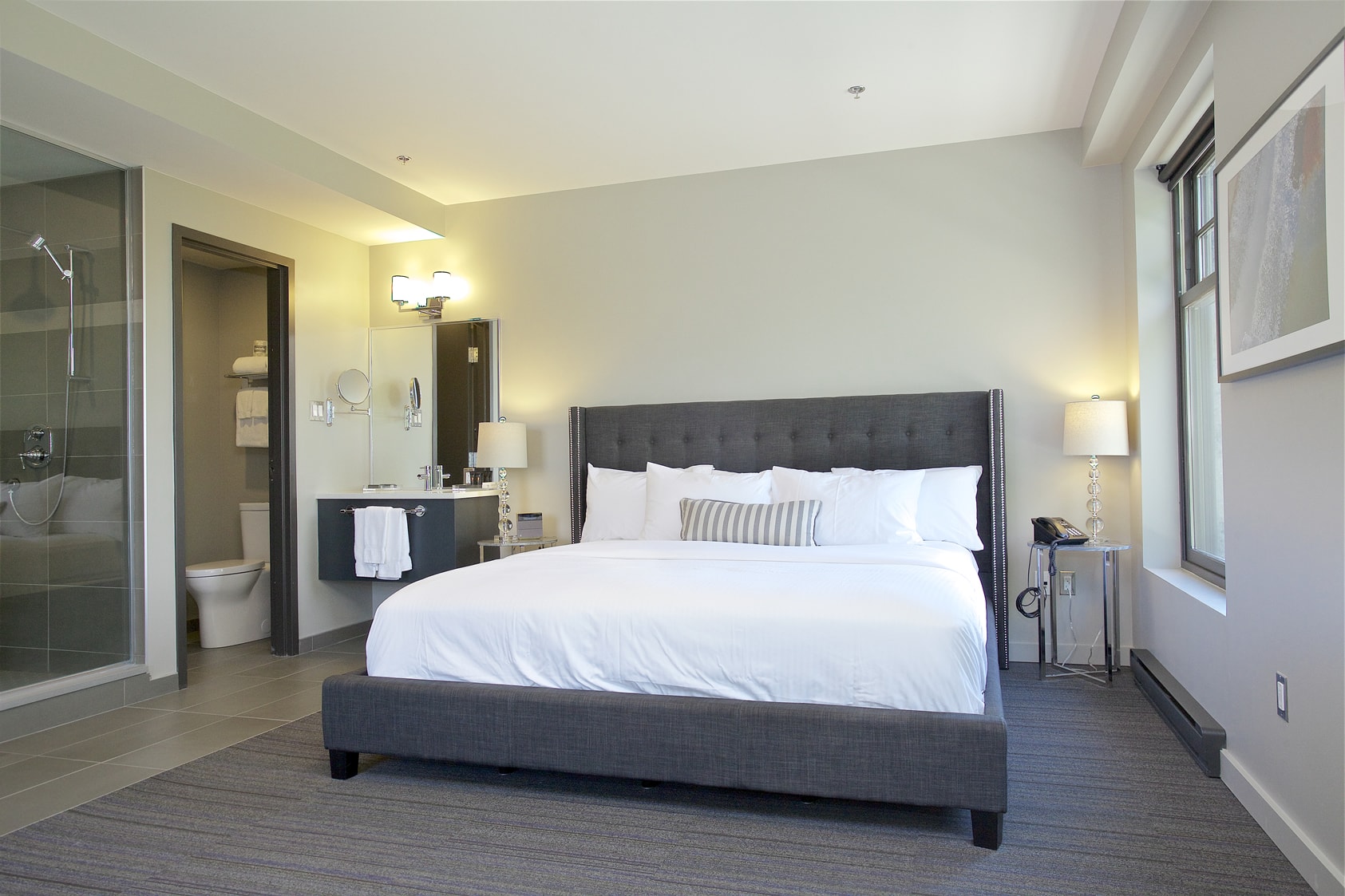 Canadian politician D’Arcy McGee was assassinated on Sparks Street in Ottawa in 1868. The police took off after the assailants but lost them crossing the Chaudière Bridge into Quebec. That night, four nervous strangers arrived at a party at the British Hotel. No one knew who they were or why they were there, but it was later claimed that these men were D’Arcy McGee’s assassins, attempting to establish their alibis at the famous British Hotel. Situated over the back door through which D’arcy McGee’s assassins may have fled, this room offers a beautiful view of the Ottawa River as well as Old Aylmer’s historic downtown. It includes a king-sized bed, large modern bathroom, and a workspace for business visitors. 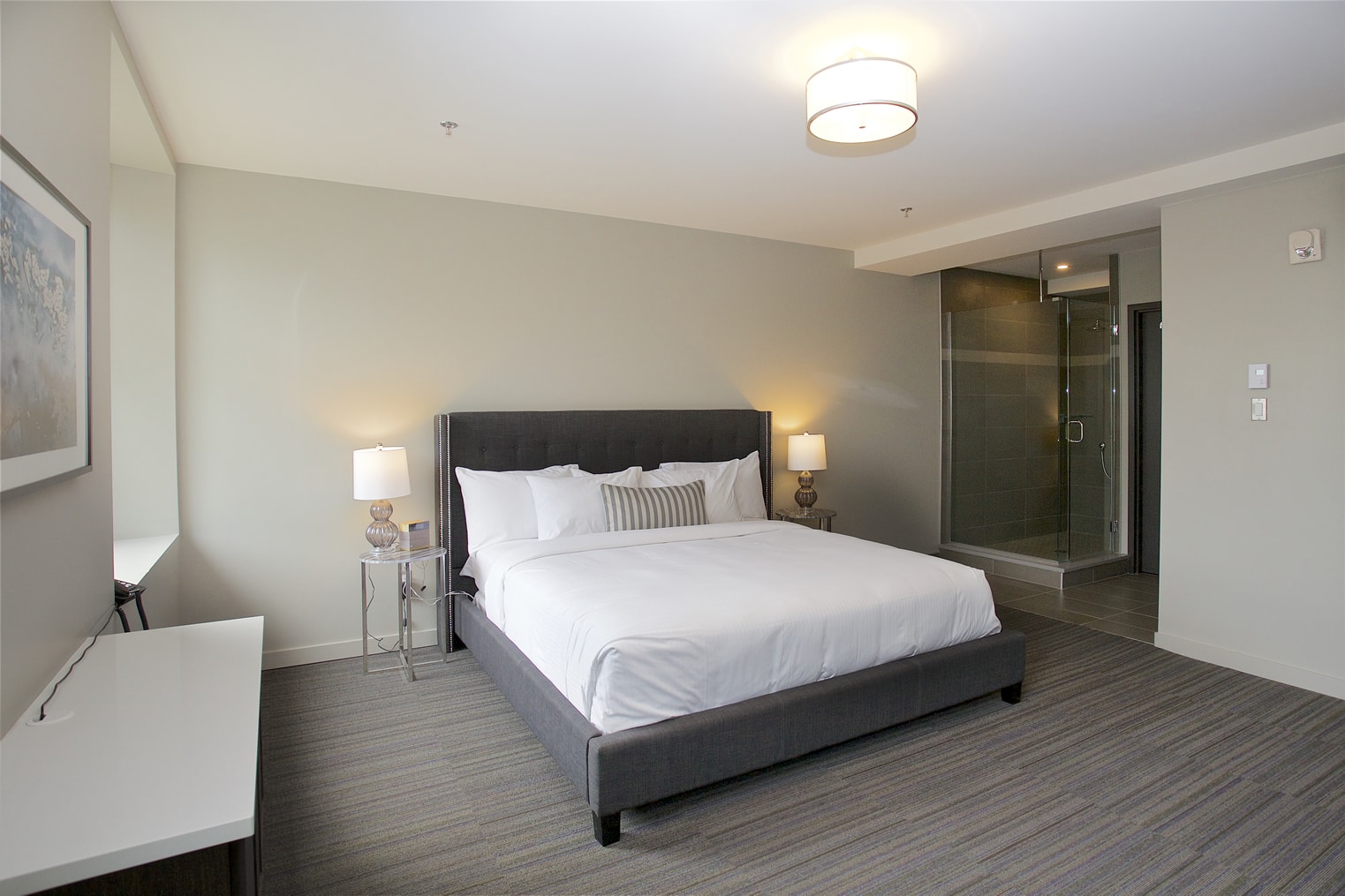 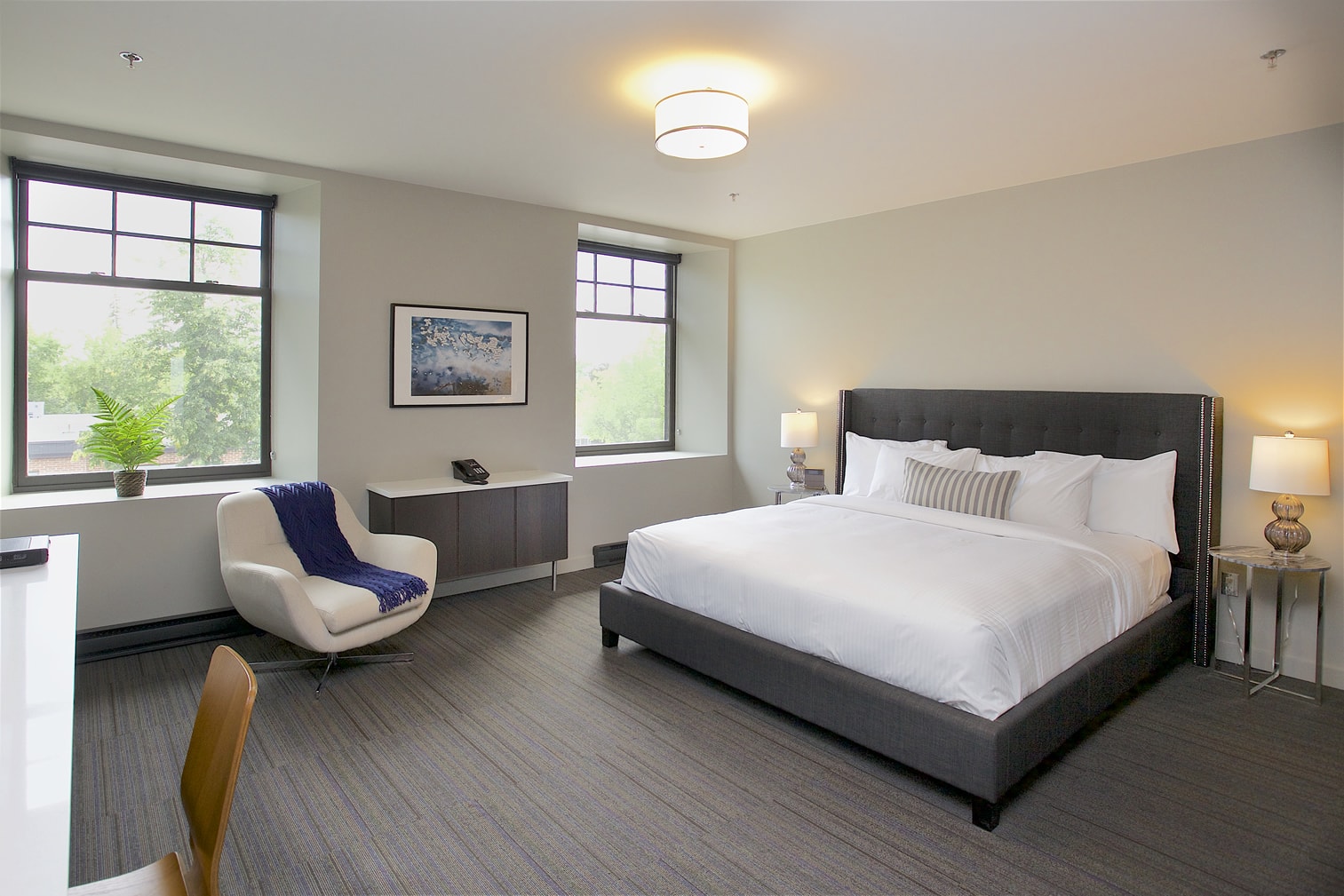 In October 1895, the British Hotel served as a neutral site for political strategy and negotiation when Sir Charles Tupper stayed at the British Hotel accompanied by then-prime minister Mackenzie Bowell and several dignitaries from the U.K. and U.S. This particular meeting came at the height of the Manitoba Schools crisis, an explosive issue that would cause Bowel to resign and make Tupper Canada’s sixth prime minister. Overlooking Old Aylmer’s heritage district, the Tupper room mixes modern luxury with the charm of yesteryears. A king-sized bed and contemporary bathroom with walk-in shower offers relaxation and comfort. 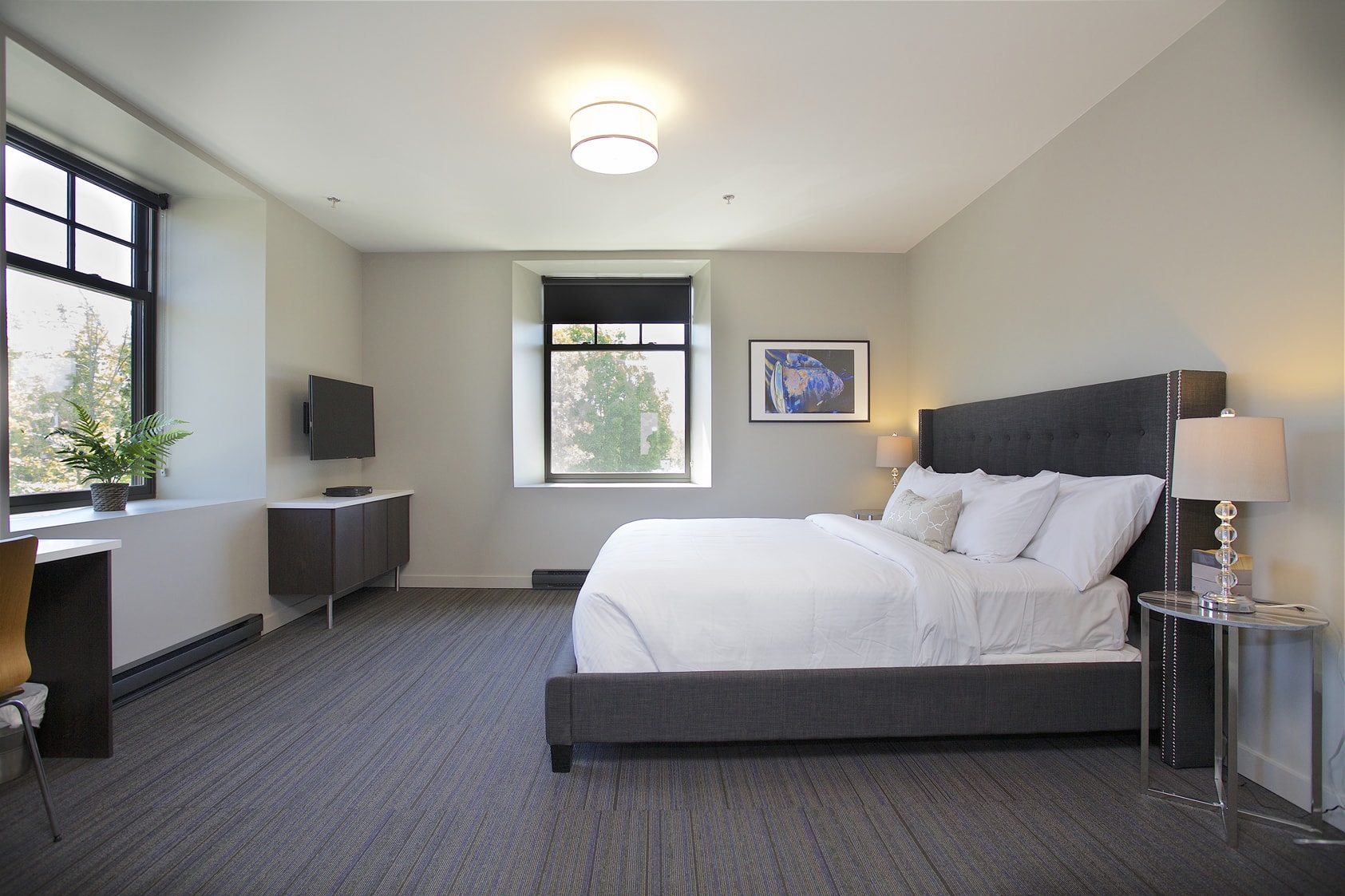 This spacious room overlooks the courtyard between the British Hotel and Café. This site was once the location of Mondoux Hardware, a family-run business that served Aylmer for more than 30 years. Large windows allow guests a sunny view of the courtyard and the many heritage buildings of Old Aylmer’s main street. The room is elegantly decorated with all modern comforts, including a king-sized bed and a luxurious walk-in shower. 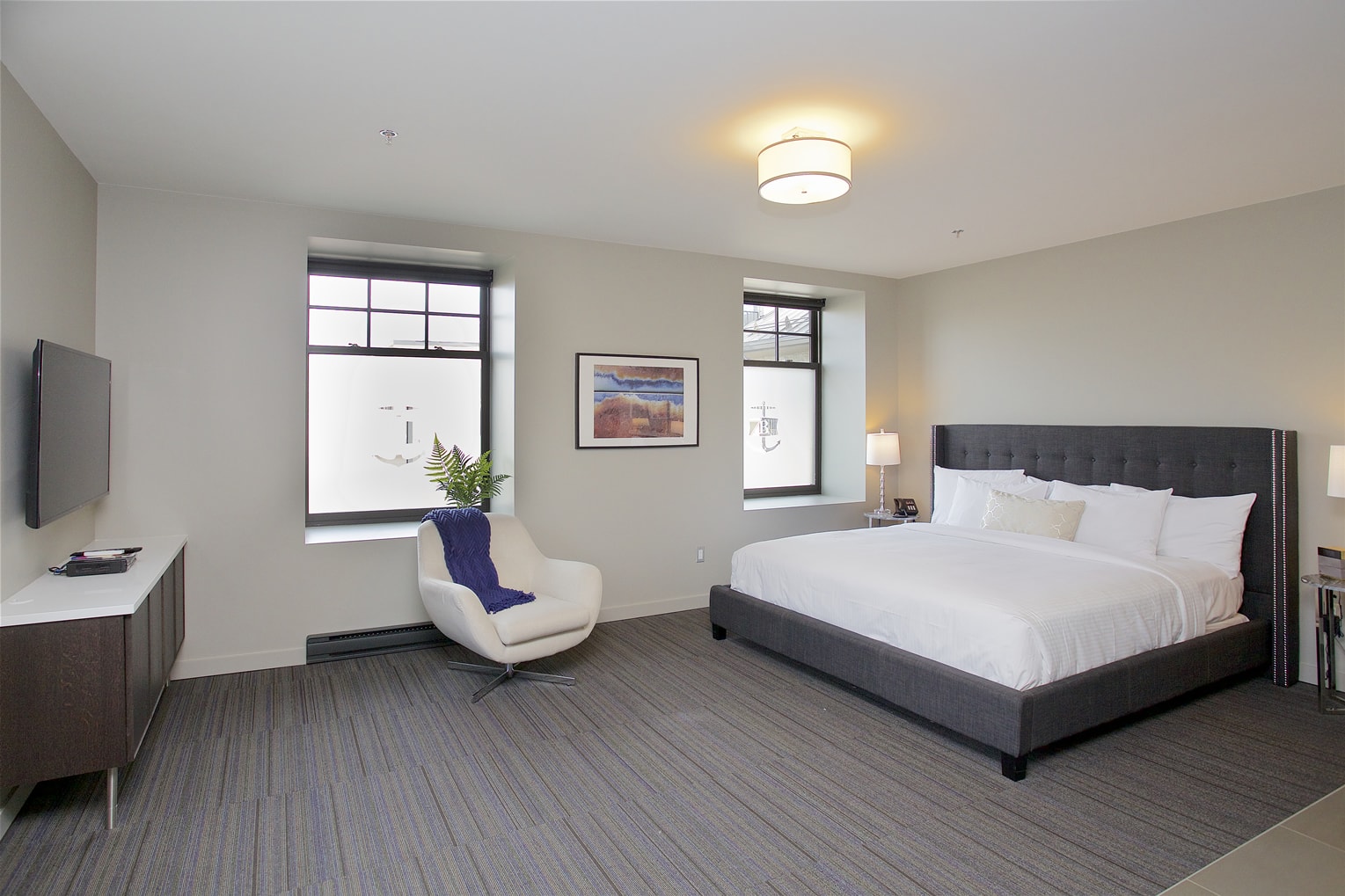 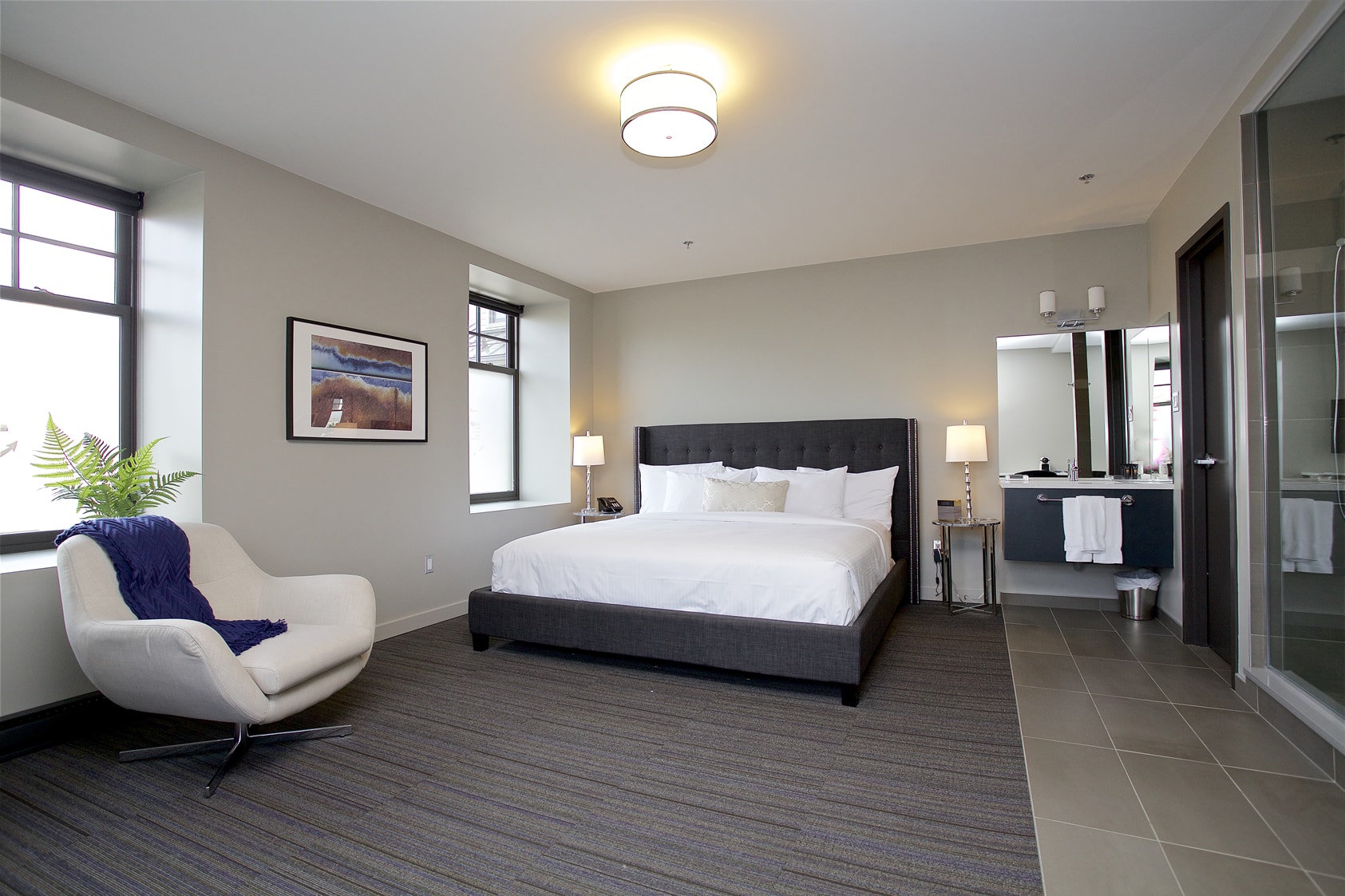 As the British Hotel was rising to fame in the early 19th century, so was French-Canadian strongman, Jos Montferrand. A hero among the working class, the six-foot-four logger travelled up and down the Ottawa River, leaving behind incredible tales of his strength and fighting abilities. When out drinking, Montferrand’s signature move was to do a back flip and leave his boot print on the ceiling of the pub. According to legend, the British was honoured with the big man’s imprint during the logging heydays of the 1800s. The Jos Montferrand room is, of course, fitted with a bed big enough for the legend himself. With a sleek, contemporary design and a splash of historical colour from the logging heydays of Aylmer, this room is a quiet retreat for business travellers or visitors to the Ottawa area. 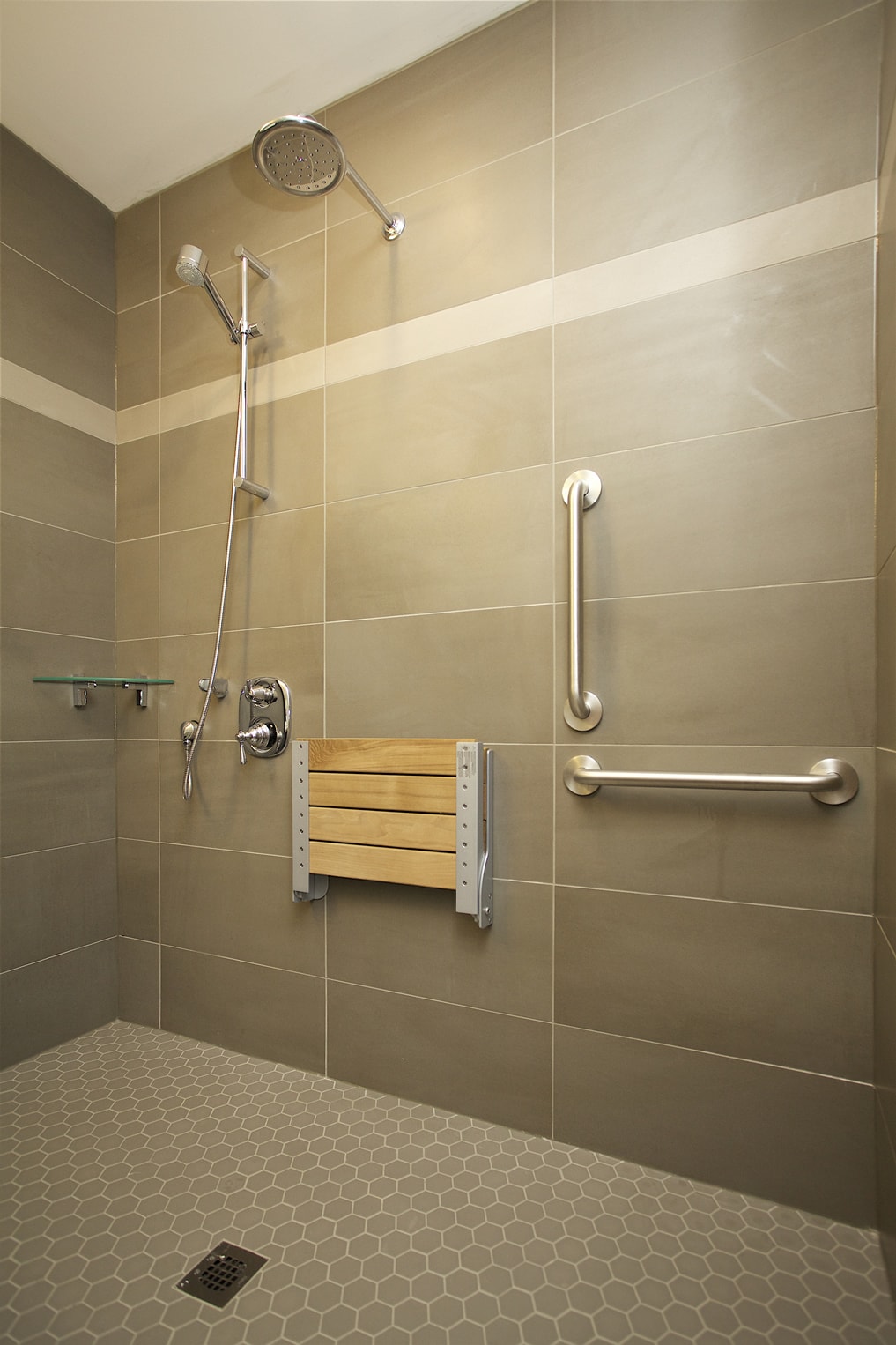 Yvette Ayotte was a resident of the British Hotel for over 40 years, and the last person to live within its walls before it temporarily closed for renovations in 2011. She was known throughout Aylmer for her colourful outfits and cheerful laughter. Although well into her eighties, Yvette would walk up and down Aylmer’s main street every day, chatting with friends and neighbors along the way. The Yvette Ayotte room maintains the modern style of the British but with a burst of colour that pays homage to the hotel’s longest resident. This room is also fully accessible with a walk/roll-in shower, grab bars, and a double bed.